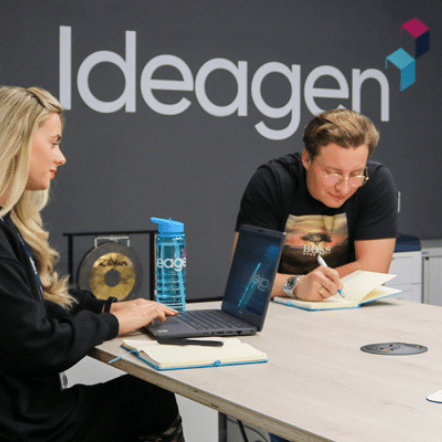 “With the pandemic situation, we took a support team of 55 people and sent them all home to work the day after we'd made that decision. The ability for us to send them home, so they can work on a SaaS product is vitally important, but we were also able to make changes within Zendesk really quick.”

Head of Customer Experience and Support at Ideagen

Head of Customer Experience and Support at Ideagen

For nearly three decades, highly-regulated industries like aviation, healthcare, biological research, finance, and banking have turned to Ideagen for risk and compliance management. Ideagen is a platform that offers software solutions for industries and companies where maintaining safety and security is paramount. Managing risk and ensuring compliance is more than just satisfying regulators and protecting the bottom line—it’s also about keeping people safe.

Big changes, big challenges in moving to the cloud

Ideagen has nearly doubled in size every year for the last nine years. New tools and companies are acquired all the time, with the customers expecting integration and visibility from Ideagen, along with their more sophisticated solutions. In addition, Ideagen faced new challenges as it is moving from on-premise perpetual license model to a cloud-based platform of solutions. Support for Ideagen, has changed quite dramatically in this transitional period. Not only have they had to do a big restructuring to accommodate business changes (with regular adjustments), but they went from being able to connect to someone’s machine remotely and walking them through what’s happening to jumping on a server to diagnose and debug issues.

Moving to the cloud has fundamentally changed the way support works at Ideagen. With a cloud-based platform, the SaaS provider takes on a bigger share of the support. Where customers would have first started with their own configurations, hardware, and internal network teams when there was an issue, now they turn to Ideagen instead. “When everything sits on our infrastructure and we’re responsible for that, then we’re the first port of call. And the expectations of response time are greater, because if something is not working, there is no way for the customer to fix it themselves.” Rising customer expectations needed a platform that could adapt to meet them.

Ideagen needed a platform that could unify its support operations across no fewer than 20 products, adapt quickly to changes, while also integrating with Salesforce Cloud, the hub of the hub-and-spoke architecture of their tech stack.

Time to own your own fate

Ideagen had a long buildup of frustrations with its previous system, hitting all areas of support ticketing—communication, automation, reporting, and queue management—which brought extra frustration because they were already using the most configurable tool on the market. Each group had so many custom configurations universal changes or even integrations were impossible. Email triggers were unpredictable or didn’t make sense, so creating a system of emails and notifications was hard to manage. Running a simple report would take 2-4 hours each time, and because there were so many disparate systems, metrics such as ticket volume weren’t even reliable. Some parts of the support organization would need to stay in those disparate systems because adding new groups to the current setup was very difficult with all the complexity. To make matters worse, “only one person knew how our support tool’s configuration worked,” Stott said, Making changes had surprise consequences for other parts of the business in the past, so there was hesitancy to make the big necessary adjustments.

The final straw came when the number of stalled tickets in the queue reached over 3000. Instead of being able to automate follow-ups on conversations that had gone cold and resolve the tickets, the team was having to manually call each one each week. To fix that with their old system required writing expensive, high-maintenance custom logic just to clear the queue.

Stott realized if he could save agents just five minutes, he was saving the equivalent of an entire person each year. This helped him get the support he needed to redesign his support org from the ground up with a new tool.

To find a solution, Stott and his team focused first on eliminating systemic challenges through training, structure, and managing staff. When the problems continued, Stott knew that the problem was the software. A change was needed, and after getting the go-ahead from the executive team, Stott argued that instead of trying to fix what the business already had, it should ask a bigger question: “If we’d never done support before, what would we want to do?”

When Ideagen began looking at its options, Salesforce integration was identified as a core requirement. “We’re a Salesforce business, so all of our sales data is in there,” Stott said. “Our CRM data is in there. We needed tightly coupled integration and that knocked a couple of platforms off the list really quickly.” Support manager Ola Timpson added, “We have Salesforce as the hub and the other programs are the spokes. And it means that we get the right data because rather than trying to force support data or customer success data or project data into another tool, we get those in the systems that they need to be in and then feed the data back into the hub so we can access it centrally. That way, we’re actually all working efficiently and then sharing our data with each other rather than, forcing teams to all to live in the same house and just making it bad for everybody.

Both Stott and support manager Ola Timpson had experience with Zendesk, so it was quickly short-listed (along with Freshdesk). The team then went into the demo phase, and after checking out the basics, it drilled down into the specifics of the product’s SLA functionality, Salesforce integration, and how it worked with some of the custom objects Ideagen requires. It soon became clear that Zendesk would be the best solution. “When we started to get right into the nuts and bolts, Zendesk was the right option because it satisfied all of our requirements,” Stott said.

To get on top of its customer service needs and improve reporting, Ideagen’s team set up an ambitious plan for adoption and went from signing a contract to going live—including migration, configuration, and training 55 people—in a mere nine weeks. With any major transition you could expect dips in CSAT as support and customers learn the system and adjustments are made, but Stott was surprised by what they saw. “We saw no dip whatsoever, which is a testament to everybody involved,” he said. “From a support perspective, everyone embraced the change and they never missed a beat.”

Down the line, the ease and agility of Zendesk made it possible to respond quickly to global events in the Spring of 2020. “With the pandemic situation, we took a support team of 55 people and sent them all home to work the day after we’d made that decision. The ability for us to send them home, so they can work on a SaaS product is vitally important, but we were also able to make changes within Zendesk really quick.” They were able to automate responses to queries about Ideagen’s plan during times of crisis, solving hundreds of tickets in minutes, and when they went to train dozens of company volunteers as support agent reinforcements, the response across the board was about how easy Zendesk was to use.

Crucially, being able to present data and analytics in a way that is easy for executives to understand helped the team build a picture of how Ideagen’s clients interact with support—while raising the profile of a key department at Ideagen. “We do get listened to more, because we can back up what we’re saying. It’s not just anecdotal, we can share data, we can show how much time we invest on things. We can show that the decisions we’ve made around process changes have worked. When we changed shift patterns, we could use data to articulate why the changes were required, because we can see that granularity.”

That data goes beyond keeping the company’s executives informed. For example, Explore revealed that Ideagen users were regularly encountering log-in issues; when support escalated the issue to the product team, the resulting fix eliminated 25 percent of tickets. And that’s not a one-time benefit—Ideagen now has a much stronger feedback loop between support and product.

Armed with rich, actionable analytics, Ideagen now has begun to plan resource use more effectively, which, combined with better collaboration driven by Zendesk’s Collaboration add-on and workflow automation, has transformed more than just customer service. For instance, with Ideagen emphasizing mergers and acquisitions, being able to simultaneously onboard four new teams onto Zendesk without a hiccup gives company leaders the confidence to push the envelope.

These gains, Stott said, come not just from Zendesk’s ability to provide customizable analytics but also from how Ideagen has leveraged that information. “We’ve democratized the data,” Stott said. “It’s not owned by support. Everyone has access to it.” This broader data picture has helped Ideagen move towards the Holy Grail of customer support—proactive outreach. They can detect a problem with one ticket, identify the other customers it affects, and generate tickets with automated outreach before the customer even knows there’s a problem.